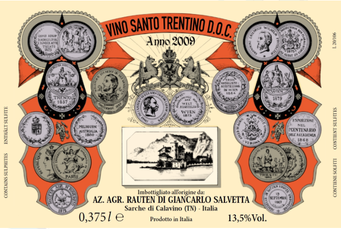 The Vino Santo Trentino, which is obtained from the grape variety Nosiola, grown in the Lakes Valley (Lower Sarca) is a sweet wine that represents one of the most documented historical productions of Trentino.
Wine production is known to exist in the Lakes Valley since the sixteenth century (Toblino Castle wine, Calavino and Santa Massenza) thanks to the first witness Pincio Giano Pirro who wrote in the Annals , also known as chronicles of Trento (1648): "...a much more lavish banquet, very rich of wines was prepared on September 12, 1536 for the arrival of King Ferdinand to Trent ... as a rule they served sweet wines, among which excelled the Moscato Bianco di Calavino,... the unsurpassable Vino Santo (Holy Wine), produced on the hills of Santa Massenza” and to the famous chronicler of the Trent Council Michelangelo Mariani, who, toghether with the the Holy Council in Trent (1673) defines the wines of Castel Toblino "rare and lovable”.

Classification: Trentino Vino Santo (D.O.C.).
Grape: Nosiola (unique native white grape originated in Trentino).
Vineyard Location: Sarche, Trento, Rauten Vineyard, along the river Sarca (Sarca Valley).
Type of Soil: Alluvial medium texture, with gravel.
Organic Certification since 2012. Three parcels totaling 1.5 hectars (6,000 vines per hectare), simple Guyot, with chestnut poles.
Vinification: The Nosiola grapes are collected late in the season. They rest for at least 5- 6 months on the so-called "arele". On these racks the grapes are exposed to winds that blow in the morning and afternoon and wither, developing inside a noble rot (botrytis cinerea) that accentuates their dehydration.
The synergistic action of time and the wind causes the loss of about 80 % of the weight of the grape: form 100 kg of Nosiola it is possible to obtain only 15/18 liters of must and then sweet wine.
The crushing takes place during Easter Week (this is likely the origin of the name Vino Santo, “Holy Wine”) , i.e. between March and April of the year following the vintage. At that time the slow natural fermentation of the sugars in alcohol begins. The sugars are very concentrated because of prolonged drying. Such fermentation, which continues for three to four years, takes place in barrels of oak and steel, where the wine remains in equilibrium until bottling.
Crushing of the grapes at 5-6 months after collection (which occurs late in the season), and natural fermentation for 3-4 years in oak and steel barrels.
Production: 1,800 bottles (0.375l).


Organoleptic Characteristics: Fine sweet wine for meditation with characteristic traits of raisin, fruit and jam, Vino Santo should be served at a temperature of 10 - 12 degrees C.